Kitchen Renovations: Lessons from the Block 2019

Recently The Block aired its much anticipated Kitchen Reveal episode on 9Now featuring Judges Darren Palmer, Shaynna Blaze, and Neale Whitaker. Five teams competed against one another for the most points, and not surprisingly, many of the kitchens emanated the same style and used the same materials as we do here at Melbourne-based Zesta Kitchens.

Today we’re going to do a quick overview of each of the kitchens, starting with the lowest scoring of the bunch, El’ise and Matt.

This smart-looking kitchen featured slick grey coloured cabinets with slimline handles and a light Primordia Caesarstone benchtop. It gave a more intimate feel and proved itself to be cutting edge with its wall of technology.

With that said, a lot of design features were obviously ignored or never considered. The island bench, while an appreciated touch, featured a sink and cooktop, meaning that there was less space for preparing food. Not only that, but guests sitting at the island bench would be able to witness food prep mess and could even be splattered with it in the process!

That wasn’t the only thing the judges thought hindered the functionality of this space. The nook was a waste of space considering the kettle and toaster were already in the laundry.

Finally, the judges had issues with the kitchen’s rangehood. They thought that it would have looked better wrapped in smoked glass or with a charcoal mirror as opposed to the applied Caesarstone. We also thought that the bulky rangehood interfered with the “open” look and feel for which El’ise and Matt were striving. 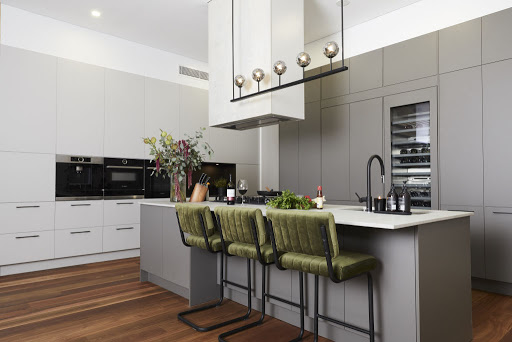 Mitch and Mark made an impression upon the judges with their metallic navy blue bottom coloured cupboards, metallic overhead cabinets, and a wall of white cabinetry. The Caesarstone splashback and matching illuminated stone at the front of the island bench added some extra glam and classiness to the space.

There were a lot of features the judges appreciated with this kitchen (not to mention the surprise drop-in by Melbourne head chef of Coda, Adam D’Sylva). The kitchen featured plenty of benchtop space and loads of storage, and the handleless moody dark cabinetry worked well with the white. The butler’s pantry meant being better able to tackle dirty dishes, and the pop up electrical unit on the bench was a thoughtful added touch.

The judges – Shaynna in particular – were not huge fans of the faux windows. Labelling the illuminated windows as “tacky”, the judges also thought the view from these windows (an English garden) didn’t suit the overall Palm Springs theme of the space.

The appliances were also a sticking point for the judges. The stack of four appliances, while functional, was an eyesore.

Finally, the judges were concerned about the lack of seating around the benchtop. This meant guests would be able to spend little time hanging out with the chef in their gorgeous kitchen. 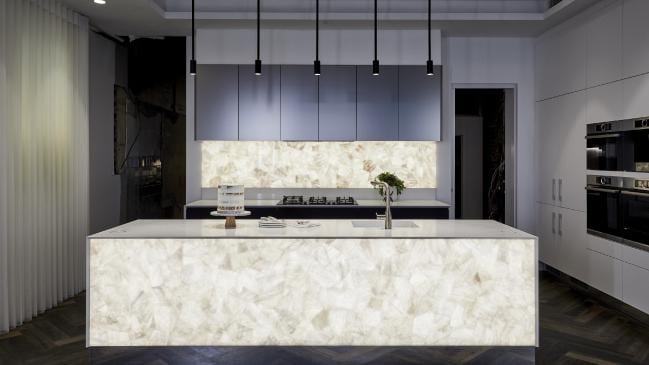 The dark flooring, black sink and taps, and push-button overhead chocolate laminate cabinetry with lights gave this contemporary yet classic kitchen a dark and moody feel. The Caesarstone benchtops and pictures offered a nice contrast to a kitchen Shaynna referred to as being “very dramatic”.

The judges had loads of positive things to say about the kitchen island, noting its attractive styling and large size. The only criticism they had was that it should have enough seating for eight people.

The main drawback was the integration of laundry in the space, though the judge admitted that it was necessary. They also felt that the four appliances in this dark room made the kitchen look cluttered, albeit functional. 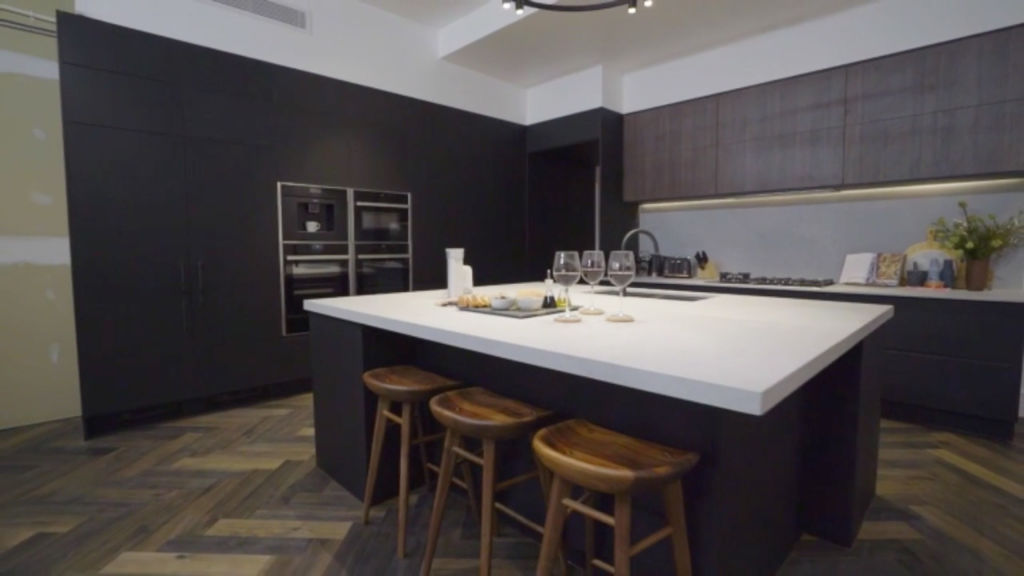 Jesse and Mel aced it with the layout and the contrast between dark and light. The incorporation of dark timber laminate cabinetry with a Caesarstone island bench worked well with the light oak timber flooring.

The kitchen was well lit, and the benchtop overhang crafted from the same material at the front of the bench gave this kitchen classy appeal. This kitchen, featuring two ovens set side-by-side and a properly located dishwasher, is one that any chef would dream of preparing food in.

The sore spot for the judges was the cramped and narrow butler’s pantry. The judges agreed that smaller cabinets or open shelving should have been used to make the space feel larger, and even so, there would still only be room for one person. 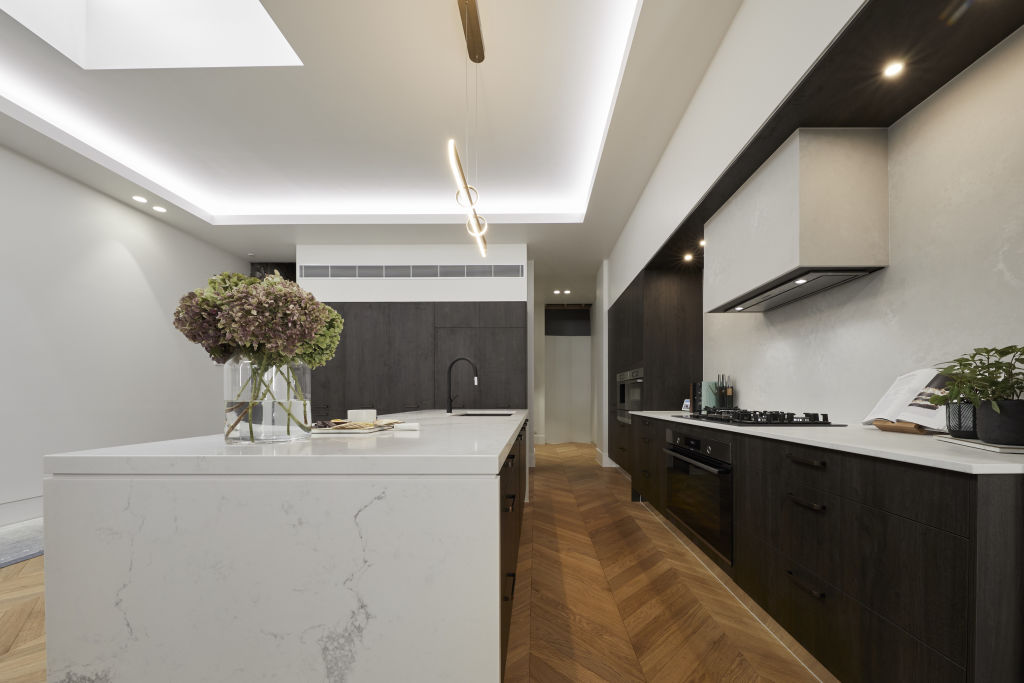 Coming in with near-perfect marks, Andy and Deb’s kitchen featured the same layout as Jesse and Mel, but the extra touches are what put them in first place.

The kitchen was a timeless white Hampton style kitchen with a row of ovens and gold brass slimline handles. An open void allowed natural light to stream into the space, giving it a more grand and dramatic feel (Darren stated that this was a “masterstroke of changing floor plan”).

The open shelving tied in nicely with the powerful rangehood, and the benchtop with fun, quirky seating was the ideal space for food prep and entertaining. The neighbouring laundry was also a hit, though the judges agreed that the door to the laundry wasn’t necessary.

The kitchen was exquisitely styled and felt high end without necessarily being so. We would have to agree with Shaynna on this one – this team really hit it out of the park. 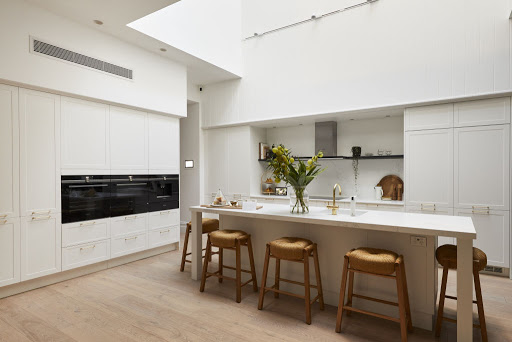 Get the look with Zesta Kitchens

Our Hampton kitchen here (pictured at the top of this page) at Zesta Kitchens has been a favourite since its introduction. Unlike a traditional costly Hampton kitchen, however, we have been able to deliver that luxurious and traditional feel for a fraction of the cost.

Click here to check out our Hampton kitchen here at Zesta Kitchens, or contact us to arrange for your free in-home kitchen design consultation with one of our accomplished Melbourne kitchen designers today.